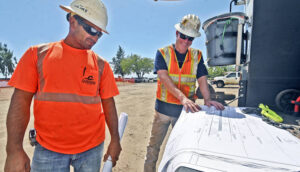 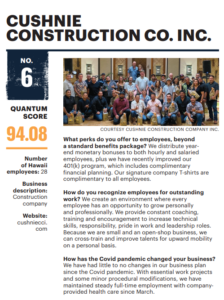 Cushnie is One of Hawaii’s Fastest Growing Companies 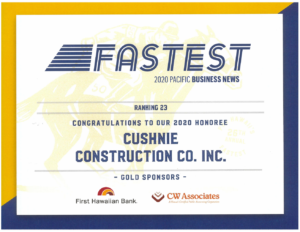 Cushnie recently placed as one of Hawaii’s Fastest Growing Companies by growth in revenue from 2017 to 2019. Cushnie also won this award in 2017.

Building a Makerspace for Island School 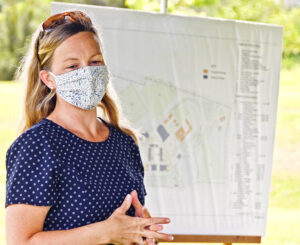 On July 1st, Cushnie broke ground on a two-story science and mathematics building designed for “deeper learning” and as a “makerspace” for more advanced education. Cushnie CCI and Island School have had a long standing relationship for the last 30 years and the space will add 10,488 square feet of classroom space to the campus. The new building, which will be located near the athletic field, will house engineering, technology, and advanced placement classes.

Cushnie Construction was recently featured in an article by the Heavy Equipment Guide.

After over 20 inches of rain on March 16th, CCCI received an emergency contract to clean up the Wailua Bridge. Cushnie was doing flood cleanup in the area and owned a unique clamshell attachment needed for the job. Structurally, the Wailua Bridge was in danger due to heavy erosion damage to the concrete reinforced wall.  A 120-foot tree that was swept from upriver was lodged on the side of the bridge, including several other pieces of albizia. After working around the clock for over a week, more debris followed.

Cushnie then created an innovative solution to processing the huge amount of debris they removed. One load of debris was dropped in an empty stadium parking lot, and the rest at two separate locations. Ralph Cushnie, Vice President, explored several options to removing the debris and finally came across the Ransome Shark Tooth RST 150 Stump Splitter/Harvester.

The Shark Tooth, while the best for the job, still needed modifications. Cushnie was able to customize the tool with an additional serrated edge to fit the specific needs and time constraints of the bridge cleanup. The customized serrated edge allowed the crew to split the fresh, green wood and load it into their Crambo shredder in one continuous step. After being processed into mulch, the debris was donated to a local coffee farm and landscaper! In the event of another big flood, Cushnie is ready to go.

Cushnie placed 4th among Hawaii’s Women-Owned Businesses in 2019. Businesses are ranked by 2018 revenue. Cushnie ranked 6th for this award in 2017.

Cushnie was contracted to repair the corroded “Black Pipe” Siphon of Kekaha.  As a critical part of the Kekaha Ditch Irrigation System, the Siphon helps to supply water to 5,000 acres of farmland across the valley where land slopes up to 90 percent. Using drone technology, Cushnie was able to visualize unique site conditions, prepare and plan for project logistics, and inspect progress.